Last year, the United States of America president, Joe Biden, spoke durnig the presidential election about leading the country in a "transition from oil". Definitely, he was not expecting to be asking for more supply a year later. On the one hand, the US administration has had trouble trying to lower oil prices and, besides, to ask other countries (Saudi Arabia and Russia) to increase production. In short, US has a big oil demand and because of this, it is dependent on other countries: they do not have enough supply.

Moreover, this situation has driven US oil prices at the highest in seven years.

As well, US oil production set to fall even global demand is expected to rise. The graphic shows the forecast pick up of the oil demand, it uses the unit Million of Barrels per Day (m b/d). That would put 2022 global oil demand above pre-pandemic levels, in other words above the 2019 average level for the first time. 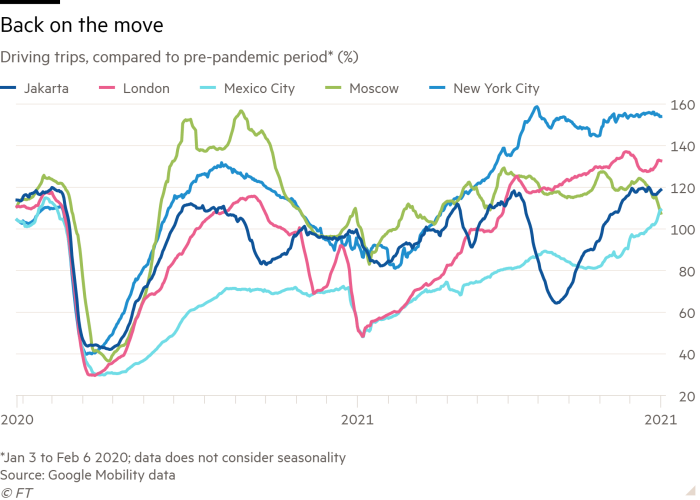 Stickers of a pointing Joe Biden, declaring, ‘I did that’, have begun appearing next to the price ticker on forecourt pumps.

In fact, these market distortions have little to do with energy policy. They are mostly the result of a global oil industry responding to last year’s price crash.

According to Martijn Rats, chief commodity strategist, the oil industry is investing for net zero, but our demand doesn’t look anything like net zero. A peak in supply is probably going to happen before a peak in demand.

Pandemic lockdowns had helped cure the world of its oil addiction because the air quality in cities improved last year. 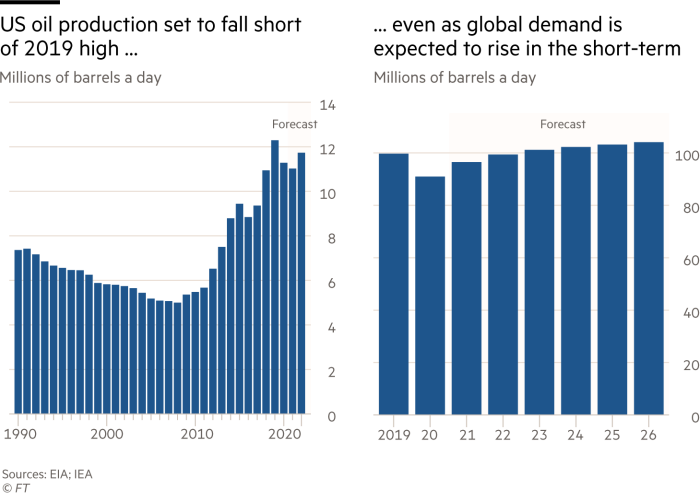 BP now estimates that global consumption is already back to 100m b/d, close to 2019 levels.

In ordinary times, oil prices at more than $80 a barrel — about $30 above the long-term average price in real terms — would have already triggered considerable demand erosion. This time, however, there is little sign of consumers reacting to the higher price by cutting back, says Morgan Stanley’s Rats. “We don’t know where the demand destruction price is,” he says. Nobody is reacting to higher oil prices as they might have done pre-pandemic, he adds. "I don’t think people are going to say, ‘I’ve not seen my client for two years. I’ve not been on holiday for two years...but I’m not going to fly because oil’s at $95 a barrel’."

Shale could come up short

The US is the most visible place in where can be seen that the bigger market distortion is in supply. Oil companies are breaking in with cash again.

In April 2020, US oil prices crashed below zero for the first time but, in contrast, they sat at almost $85 a barrel last week.

American shale producers' spectacular supply growth over the past decade made the country the world's biggest producer. One explanation is the arrival of an era of capital discipline in a shale patch that was notorious for an addiction to drilling that wasted creditors' cash. Even now, as producers such as Pioneer Natural Resources and Diamondback Energy pay chunky dividends and report bumper cash flows, investors remain wary.

"We've all decided that we want to stop investing in oil supply. But nobody told the costumer"

Pressure to 'not invest'

In April 2020 for the first time the oil prices in the United States decreased quickly by a large amount, more specifically they crashed below zero. However, in October 2021 the prices were about $85 a barrel. As a result, nowadays produces are under the pressure to stop investing in fossil fuel and start doing it with renewable energy. But even so, they have a high oil demand.

Request for more oil from Saudi Arabia and its partners. Even, analysts Amy Myers Jaffe, a professor at Tufts University’s Fletcher School, says Saudi Arabia should beware of taking that position for granted. Her reasoning is: "It's never been the case that people look at the higher oil price and say 'You know what? I want to be more dependent on Saudi Arabia, and Russia and Iran, so therefore I’m going to stop doing alternative energy'".


On the one hand, transit from oil to other energy sources is a matter complex and important enough to leave politicians alone deciding their future.

The way to end the use of oil, due to its contamination, is not to raise its price. From my point of view, the optimal way would be to develop alternative energies that work properly and that begin to globalize once and for all.

This article only talks about the political problems regarding the change of oil to other energy sources. But engineers and scientists that are specialized in this field (materials scientists, for example) also have a great role since they are the experts who control the subject and those who should have a voice in this matter about which there is so much misinformation by part of both the population and the politicians who are trying to solve it. I feel that the important role that scientists and experts have in this matter is not reflected in this article when, personally, I think that they are an essential part.

On the other hand, more renewable energy, in other words, doing alternative energy, would allow to being less dependent on other countries and, moreover, to lead in that transition from oil which Biden spoke during last year's election.