Analysis of an article


A possible planet candidate in an external galaxy detected through X-ray transit according to Nature Astronomy (25 October 2021).


From the mixture of techniques designed for X-ray emission from very hot region detection, the identification of exoplanets in external galaxies is carried out. This is basically the purpose of this article, explain the method used for detecting this planet candidate to make the discovery of a single transit lead to more detailed studies of planets and other low-radius objects in external galaxies.

X-ray binaries (XRBs) may be ideal places to search for planets: a planet passing in front of the X-ray-emitting region may produce a total or near-total eclipse of the X-rays. Binary M51-ULS-1, one of the brightest XRSs in M51 galaxy, is an ultraluminous supersoft source in which it had been studied the light curves of XRBs to search transits. For the obtainment of the X-ray observations, there has been needed the employment of Chandra and XMM-Newton which are sophisticated telescopes specially designed to detect X-ray emission from very hot regions of the Universe. The dominant set of bright XRSs in external galaxies are X-ray binaries (XRBs) in which black holes (BHs) or neutron stars (NSs), the remnants of massive stars, accrete matter from a stellar companion. However, the point is that telescopes designed for the detection of X-ray emission aforementioned has been used the detection of the transit of this planet candidate.

A counterpart to M51-ULS-1 in a Hubble Space Telescope (HST) image consistent with the stellar type B2-8 had been identified. A short aside, a counterpart is an electromagnetic signal associated with the location on the sky and the time of a gravitational wave event. Gravitational waves are accompanied by a short-duration ray explosion powered by the accretion of material that remains in a centrifugally supported torus around, in the case of this planet candidate, the neutron star (NS). There is a high probability that this luminous blue object is actually the counterpart to the XRS. First, bright soft X-ray emitters generally have counterparts that are optically bright, and a blue supergiant is one of the predicted counterparts to ultraluminous X-ray sources (ULXs).

The object transiting M51-ULS-1 is not only outside the Solar System, but also far outside the Galaxy. It is an extragalactic planet-size object orbiting a defined binary system. We refer to the transiter as a possible exoplanet.

The luminosity of M51-ULS-1 is roughly 106 times that of the Sun. At the orbital distance we have estimated for M51-ULS-1, its atmosphere is likely to survive the presently observed X-ray active phase. Whether the flux is significantly larger or smaller depends on its distance from the center of mass of the X-Ray Binary, which can only be estimated based on the relative velocity. The circumstances under which planetary and brown-dwarf atmospheres are ablated by irradiation is still under consideration.

Once there have developed a larger sample size, we will be able to answer some physical questions about planets orbiting XRBs in other galaxies, as well as those orbiting XRBs in the Milky Way. For example, we will know if planetary transits are found around the XRBs that we observe to be eclipsing, establishing the frequency of aligned orbits. We will find planets with a range of sizes and with a range of orbital radii, and will explore the relationship between planet properties and host XRB characteristics. We can then use general expressions for the detection probability to extrapolate from our discovered sample of planets to the size and characteristics of the underlying populations in the galaxies we study (Methods, "Probability of detecting a transit or a transition to eclipse").

In contrast to the 2020 preprint, this article has a methods section where there are more detaily explained many areas mentioned in the article such as the X-ray observations with Chandra and also with XMM-Newton. About NASA's telescope it is explained the way the data were downloaded from the public archive and reprocessed using standard tasks in the Chandra Interactive Analysis of Observations. And about the european telescope it is said that the method employed is very similar to Chandra's. They had extracted the count rates of M51-ULS-1 for each observation.

In the methods section there is also explained the search for X-ray transits: the identification of transits, the strict criteria followed... There is some information about the nature of the transiting object, for example, it is said that the transiter cannot be a white dwarf because of the binary's youth. Feasibility of wide orbits is plausible because planets with orbits having in the range of tens and hundreds of astronomical units are common among Galactic exoplanets. A part from that, there is also an interesting development of the probability of detecting a transit or a transition to eclipse

Futhermore, there are extension data of, for example one remarkable, accretion dips. There is an extended data of Figure 4, in this case, in which there are three graphics with exemplars of X-ray observations of accretion-related dips.

In addition, the following figure (Figure 5) shows a transit which is shown as an analogy to the Extended Data Figure 4, the one above. It is a graphic which represents an eclipse event with no evidence for spectral variations across the transit and the sizes of the error bars are low count rates. 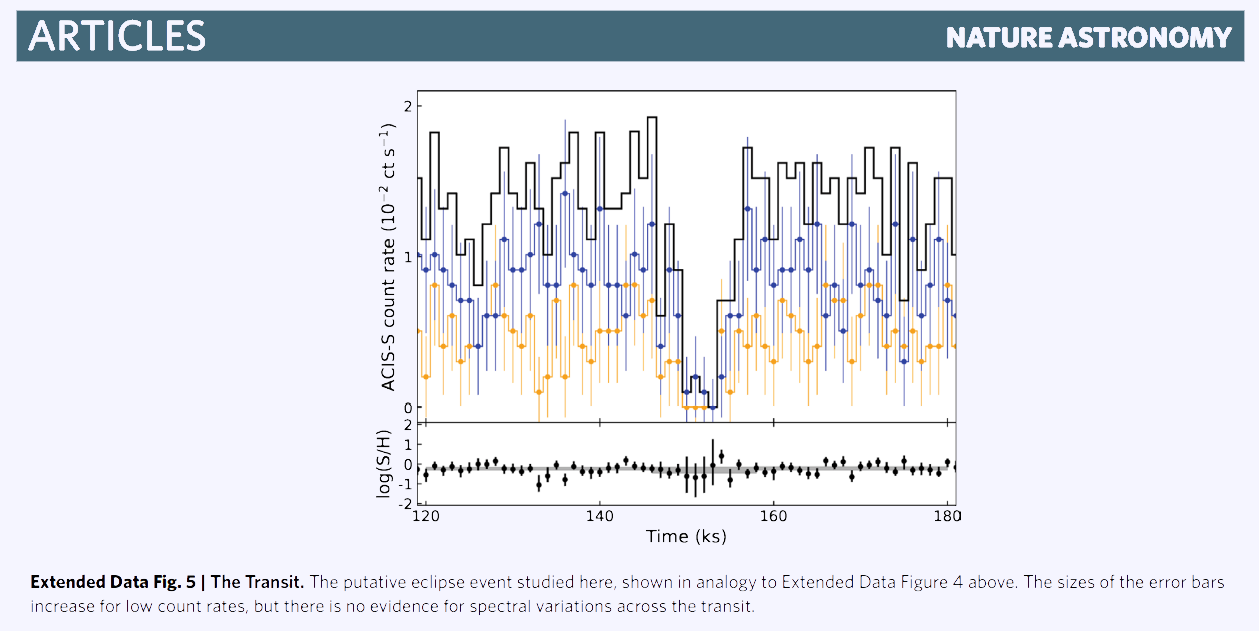 To conclude with this analysis, as it is said in this article, the discovery of M51-ULS-1b has established that external galaxies host candidate planets. It also demonstrates that the study of X-ray transits can reveal the presence of otherwise invisible systems, which will also include brown dwarfs and low-mass stars. Discovering and studying extragalactic planets or small objects in external galaxies can establish connections with the Milky Way and help humanity to understand better their enviroment.