Drug discovery has the following stages.

The first one is in silico, this means that the scientific experiments or research is conducted or produced by means of computer modelling or computer simulation.

Then, the experiments or research becomes in vitro. This means that the process is performed or taking place in a test tube, culture dish, or elsewhere outside a living organism.

Subsequently, the process is performed or taking place in a living organism. This phase is called in vivo.

Lastly, clinical trials are made. These are research studies performed in people that are aimed at evaluating a medical, surgical, or behavioral intervention. They are the primary way that researchers find out if a new treatment, like a new drug or diet or medical device (for example, a pacemaker) is safe and effective in people.

It is to separate compounds and obtain physically separated substances and have them in quantity.

In column chromatography, a mixture of molecules is separated based on their differentials partitioning between a mobile phase and a stationary phase.

Click here to watch an animation of the chromatographic separation.

Thin-layer chromatography is performed on a sheet of an inert substrate such as glass, plastic, or aluminium foil, which is coated with a thin layer of adsorbent material, usually silica gel, aluminium oxide, or cellulose.

We can see the steps of the thin-layer chromatography in the following image. 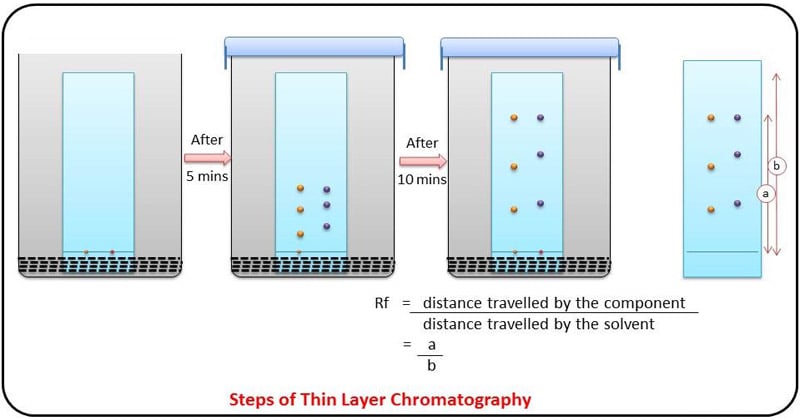 After the previous preparation, there is the mobile phase in which it is used a single solvent. The role of the solvent in column chromatography is to separate the mixture into different zones, to introduce the mixture into the column and to remove the pure components of each separated bands as elements.

High-pressure liquid chromatography, HPLC, is a technique in analytical chemistry used to separate, identify, and quantify each component in a mixture.

In column chromatography a solvent drips through a column filled with an adsorbent under gravity. HPLC is a highly improved form of column chromatography. A pump forces a solvent through a column under high pressures of up to 400 atmospheres. The column packing material or adsorbent or stationary phase is typically a granular material made of solid particles such as silica or polymers.

The pressure makes the technique much faster compared to column chromatography. This allows using much smaller particles for the column packing material. The smaller particles have a much greater surface area for interactions between the stationary phase and the molecules flowing past it. This results in a much better separation of the components of the mixture.

The components of a mixture are separated from each other due to their different degrees of interaction with the absorbent particles. This causes different elution rates for the different components and leads to the separation of the components as they flow out the column. Compared to column chromatography, HPLC is highly automated and extremely sensitive.

The components of a basic high-performance liquid chromatography [HPLC] system are shown in the simple diagram in Figure E.

A reservoir holds the solvent [called the mobile phase, because it moves]. A high-pressure pump [solvent delivery system or solvent manager] is used to generate and meter a specified flow rate of mobile phase, typically milliliters per minute. An injector [sample manager or autosampler] is able to introduce [inject] the sample into the continuously flowing mobile phase stream that carries the sample into the HPLC column. The column contains the chromatographic packing material needed to effect the separation. This packing material is called the stationary phase because it is held in place by the column hardware. A detector is needed to see the separated compound bands as they elute from the HPLC column [most compounds have no color, so we cannot see them with our eyes]. The mobile phase exits the detector and can be sent to waste, or collected, as desired. When the mobile phase contains a separated compound band, HPLC provides the ability to collect this fraction of the eluate containing that purified compound for further study. This is called preparative chromatography [discussed in the section on HPLC Scale].

Note that high-pressure tubing and fittings are used to interconnect the pump, injector, column, and detector components to form the conduit for the mobile phase, sample, and separated compound bands.

The detector is wired to the computer data station, the HPLC system component that records the electrical signal needed to generate the chromatogram on its display and to identify and quantitate the concentration of the sample constituents (see Figure F). Since sample compound characteristics can be very different, several types of detectors have been developed. For example, if a compound can absorb ultraviolet light, a UV-absorbance detector is used. If the compound fluoresces, a fluorescence detector is used. If the compound does not have either of these characteristics, a more universal type of detector is used, such as an evaporative-light-scattering detector [ELSD]. The most powerful approach is the use multiple detectors in series. For example, a UV and/or ELSD detector may be used in combination with a mass spectrometer [MS] to analyze the results of the chromatographic separation. This provides, from a single injection, more comprehensive information about an analyte. The practice of coupling a mass spectrometer to an HPLC system is called LC/MS.

The tail flick test is a test of the pain response in animals. It is used in basic pain research and to measure the effectiveness of analgesics, by observing the reaction to heat.

Most commonly, an intense light beam is focused on the animal's tail and a timer starts. When the animal flicks its tail, the timer stops and the recorded time (latency) is a measure of the pain threshold. Alternate methods can be used to apply heat, such as immersion in hot water.

Alternately, a dolorimeter with a resistance wire with a constant heat flow may be used. For the tail flick test, the wire is attached to the tail of the organism, and the wire applies heat to the tail. The researcher then records the latency to tail flick.

Researchers testing the effectiveness of drugs on the pain threshold often use the tail flick test to measure the extent to which the drug being tested has reduced the amount of pain felt by the model organism. Both laboratory mice and rats are a common model organism for these tests.

Carrageenan1-induced paw edema2 is one of the most popular tests used in the screening of African spices and vegetables for antiinflammatory activity.

1.- Carrageenan is an insoluble fibre, which is not digested and is added to various food products, except in evaporated milks. Carrageenan when ingested causes inflammation in the intestines, as well as intestinal discomfort.

2.- The presence of excess fluid in an organ or tissue of the body, which may sometimes have the appearance of a soft swelling.

First, Plethysmometer displays the exact paw volume. A model on rat paw swelling has to be made. The Plethysmometer (Paw Edema) test serves to measure the effectiveness of anti-inflammatory agents to reduce edemic conditions.